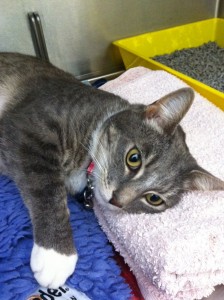 Jonah reports that snakes are out and about again. He found one on Saturday night. His carers thought he wasn’t himself on Sunday but when they came home on Monday and found him not able to stand they were sure he wasn’t well.  His breathing was a bit laboured and his eyes were huge.
When we saw him he complained of his plight in a rather plaintive voice. His legs were very weak and he could hardly hold his head up.
This “floppy doll” weakness in a young cat at this time of year rang alarm bells for us.
Adventurous cats and snakes rousing from their winter snooze on a hot weekend are a recipe for disaster! Snakes are especially full of venom at the beginning of the season.
Jonah had some brown snake antivenom and has been on a drip to keep him hydrated. Cats paralysed by snake venom soon become dehydrated because they cannot eat or drink. Jonah has responded well and hopes to go home today!