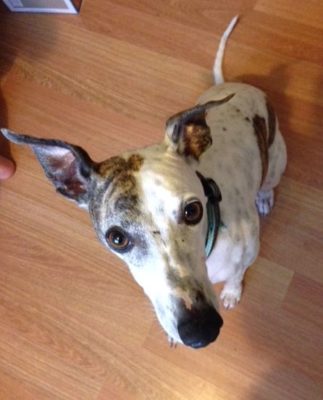 Its two months now since Gov’nor, the bravest and sweetest of Whippets, presented to us collapsed after being severely attacked by a new foster dog. The skin on his chest and between his forelegs was punctured and pulled away from the underlying pectoral muscles which were also severely damaged. After initial emergency treatment overnight, he arrived at Hall Veterinary Surgery for ongoing care, still suffering from shock and having difficulty breathing.

Over the next few days, Gov’nor responded to treatment for shock which included intravenous fluids and nasal oxygen therapy. To manage his pain, he received a constant infusion of pain relief in his drip as well as intravenous antibiotics as his bruised skin was a prime target for infection.

X-rays of Gov’nor’s chest and blood tests showed that the injuries were confined to the skin, however as the days passed, it became clear just how large the affected area of dead skin had become. All of the skin between his forelegs and also behind and in front of his elbows turned grey and smelt of dead tissue bereft of blood supply due to the severe trauma of the attack.

Gov’nor’s loving owners agonised over the decision whether to proceed with treatment to remove all the dead skin, given the severity of the damage, and concern about what Gov’nor was going through.

We talked about the amazing healing capacity of skin and that Gov’nor’s youth, general fitness and calm temperament would help him to recover and cope with the treatment of the huge wound. We all decided to give him a chance.

Dr Lesa anaesthetised Gov’nor and removed all of the dead tissue and cleaned the wound. There was no option to suture the remaining skin closed over such a large area of skin loss. So we applied sterile dressings to protect the healing granulation tissue underneath and continue pain and infection control.

Twice a week, for these last 2 months, Gov’nor has patiently complied with dressing changes and wound cleaning. He would shuffle out after each session sporting a new brightly coloured vest of bandages that held his dressings in place.

It has been amazing to witness the speed with which his skin is covering over the massive wound. On the home stretch now, his loving family are seeing the fruits of their efforts and Gov’nor is nearly back to his old self again.