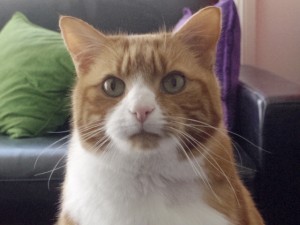 Momo’s had a bad week. His mum found him shivering under a bush on Thursday morning. When she coaxed him inside he didn’t feel much like breakfast and curled up in front of the fire. He’d eaten dinner on Tuesday and gone out for a stroll around his domain feeling as fit as a fiddle. By the time his mum found him he had a fever and was very miserable.
When she took him on her lap for a cuddle he snuggled up until she rubbed his head – OW!  He sprang onto the floor and under the couch.
His mum realised something was very wrong and whisked him in to see us. We found a tiny wound on his head and extracted a claw. Poor old Momo had taken on an intruder in his garden. No wonder he had a headache – an abscess was forming under the wound.
We started treatment straight away. Blood tests and observation proved that it was a fresh wound so we clipped and cleaned it, started strong antibiotics (cats’ mouths contain some very nasty bacteria that love the airless space under the skin) and gave him something for the headache.
Because Momo’s owner had found him soon after the brawl and the wound was fresh we didn’t have an abscess to lance. The earlier we can treat cats after a fight the less likely it is that a general anaesthetic and surgery will be necessary.
Cats are most active finding mates and defending their territory in late winter and spring. Poor old Momo had got caught up in the annual feline fight festival. His mum is going to keep him indoors after dinner and through the night to try and prevent another episode.