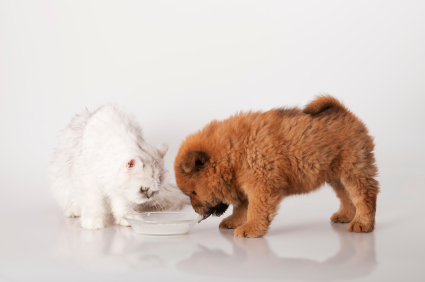 There has been some excitement in science circles recently about how dogs and cats drink.

In the November 2010 edition of Science, Pedro Reis et al. of MIT released an article showing high-speed camera observations of a domestic cat lapping water. Their claim is that the lapping mechanism is more about the column of water which follows the cat’s tongue, rather than the small amount scooped up by the (backwardly flexed) tip of the cat’s tongue. You can watch the videos and draw your own conclusions.

Miffed at aspersions cast upon dogs by the MIT researchers, A. W. Crompton and Catherine Musinsky from Harvard published in the Royal Society’s Biology Letters a letter, How dogs lap, complete with x-ray video, which showed the same mechanism in dogs.

Having viewed both sets of videos (cats and dogs), I’m still not convinced that they are actually taking up much of that column of water, and I conclude that the majority of what is lapped is still that scooped up – very deftly – by the backward pointing tip of their tongues. We invite you to watch the videos and draw your own conclusions.

A review of the new report is on ABC Science Online.