Seizures are not uncommon in dogs but rare in cats. Seizures are also known as convulsions or fits.
Seizures consist of three stages: 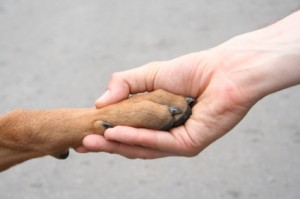 Despite the dramatic signs of a seizure, the dog feels no pain, only bewilderment.
Dogs do not swallow their tongues. Do not put your fingers in your seizuring dog’s mouth as you will get bitten.
All you can do is to prevent your seizuring dog from falling or hurting himself.
As long as he is on the floor or ground and away from steps or drops, there is little chance of harm occurring.

Epilepsy for no detectable reason is the most common type of seizure. Some toxins such as lead, hallucinogens or snail bait cause seizures. Blows to the head and, in older dogs, brain tumours also result in seizures.

What tests can we do to find the cause?
We start with a full general examination and a neurological examination. Blood and urine tests help rule out metabolic causes for brain dysfunction.
If all tests are normal and there is no exposure to poison or recent trauma, we may consider further tests including a cerebrospinal fluid examination, MRI or CT scans.

How do we prevent future seizures?
If there are no more seizures in the next few weeks, treatment is not given. If the seizures become frequent, last longer than 5 minutes each time or occur in clusters then we start anticonvulsant therapy. Usually Phenobarbitone (also known as Phenomav or Phenobarb) is the first drug we try. Potassium bromide (also known as Bromide or KBr) is added in if Phenobarbitone is not as effective as hoped or is not tolerated well.