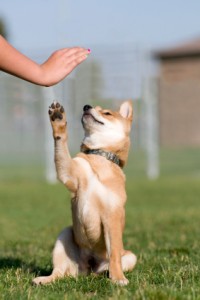 Use your pup’s name before every command to attract her attention.  She then knows that the commands are meant for her.

If she doesn’t obey, consider why not:

Training should be a positive experience.  Use rewards all the time to start with.[singlepic id=531 w=320 h=240 float=right]  Once you know that she understands the command vary the frequency and the size of the rewards.  Work on the poker machine principle “if she never knows how much the reward will be, or when it will come she will keep trying to win a reward.”

Train your puppy in lots of different places and at different times. You don’t want a dog who only comes and sits at 6pm – before dinner!

Dogs are trained by their owners using a variety of techniques.
Although the use of reward-oriented training protocols has increased in popularity in recent years, many owners still report using different kinds of punishment, especially for specific, unwanted behaviours, such as stealing an object.

However, there have been few empirical studies on how an ownerâ€™s training style affects a dogâ€™s temperament and later ability to learn new tasks.

The authors of this paper surveyed around 50 dog owners in the UK, to ask them about the methods used when training common tasks such as toilet training, sitting on command and walking to heel. The owners were then interviewed in their own homes, and their interactions with their dog were video recorded, especially while training the dog to perform a novel task (touching an object with its nose). The researchers found that dogs owned by subjects who reported using a higher proportion of punishment were less likely to interact with a stranger, and those dogs whose owners favoured physical punishment tended to be less playful.

Dogs whose owners reported using more rewards tended to perform better in the novel training task. Ability at this novelÂ  task was also higher in dogs belonging to owners who were seen to be more playful and who employed a patient approach to training. The authors conclude that, for dog owners, the use of reward-based training appears to be the most beneficial for the dogâ€™s welfare, since it is linked to enhanced learning and a balanced and healthy dog-owner relationship.