Hall Veterinary Surgery feel great sadness at the loss of our dearly loved Erika who, after living with cancer for over a year, died on Sunday February 22, 2009.

Alex Hill’s Eulogy speaks for all of us.

The Things I Love About Erika
Her loyalty to her family, her friends, her clients, and her many happy doggy customers;
Her quiet enthusiasm for life;
Her love of her garden;
Her adoring indulgence of Bracken and Revere and her other pets over the years;
The way she was so proud of Karen and Andrew, and the light in her eyes when she spoke about them;
Her determination;
Her courage;
Her absolute dignity, present in every aspect of her body and her soul;
Her beautiful laugh;
The way she treated everyone who crossed her path with the utmost respect;
Her independent spirit;
Her decision to keep working, to stay connected with the world and her loved ones, despite the pain she was in and her naturally private nature;
The humility with which she faced her fate;
And the gift that she has given me, by being her warm, generous, radiant and regal self, in spite of all the suffering she went through.
There is really no other way to say it: she was a truly beautiful human being, and I will miss her a lot.

And some have asked for Helen’s Eulogy…
I first met Erika through treating her much beloved animals. As well as being beautifully groomed and eloquently spoken, she first impressed me as an independent, competent and gentle woman with a wonderfully calm and dignified manner and an intimidating knowledge of animal care.

Her own dogs, cats and horses were cared for like royalty and had beautiful manners as well. They knew where they stood and what was expected of them. Erika had an amazing rapport with animals. Her gentle but firm manner gained their respect and trust. She spoke their language. Erika loved to observe the humour in their antics (including that of the two legged variety). She laughed and smiled a lot.

I watched in awe one day as she was busy grooming a little Maltese terrier’s clean white coat, brush in one hand and hair drier in the other, chatting now and then to him with her soothing voice. This little dog just stood absolutely motionless, eyes fixed straight ahead. I interpreted its fleeting glance in my direction as “I can’t engage with anyone right now. I need to stay still to please Erika”. Many a mutual client would comment to me about how excited their pet would be to revisit Erika and Karen for grooming. Together, they ran a highly respected grooming parlour.

Erika was also a devoted and skilful self taught human nurse, tending her family members through some gruelling trials and later, taking a great part in managing her own illness very capably.

She loved her independence and was so pleased recently to return to her beautiful home and garden in Yass. She looked foreward to walking Bracken along the banks of the Yass River.

When Erika came to be our receptionist at Hall Vet Surgery, we could not believe our good fortune. That same calm presence now took multitasking to a whole new level. She served there up until very recently with such care, dedication and integrity- remaining positive and in good humour.

What I admire Erika for the most will be the inspiring attitude with which she faced the challenges of this past year. She dealt with the grief of lost dear ones and the barrage of medical tests, treatments and bad news with fortitude, resilience and a positive mind helped by the constant support of her loving family.

With her brave spirit she joined us on holiday to Great Keppel Island, where despite her illness, she wanted to try snorkling for the first time – intent as always to make the best of what she had.

So when I feel the emptiness of Erika’s passing, I take heed of the way she lived her life – with spirit, courage, compassion and grace. I recall that beautiful smile and easy laugh and wonder if somewhere she’s off riding with Revere.

Erika’s story in her own words…

I grew up in England and as a very small child often gave my poor mother heart palpitations when, at every opportunity, I would pat and cuddle large strange dogs in the street. It was therefore no surprise when, on leaving school, my first job was as a kennel maid/trainee vet nurse. I tried to bring home from work an assortment of waifs and strays, but without success – they were always sent back.
My first dog was a gift from my husband – a tiny puppy who, he was assured by the pet shop, would grow to be about the size of a Dachshund. The Dachshund in due course grew into a very handsome dog weighing around 45kg!! 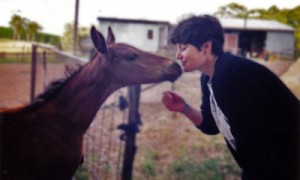 Canberra became home in 1969, arriving here with my husband, my baby son and the “dachshund”. I have lived and worked here ever since. Seven years after moving to Canberra I returned to vet nursing, which I enjoyed for the next 13 years. During this time I often groomed dogs as a “favour” for other people, and eventually became interested in dog grooming as a profession. Subsequently I went to Melbourne to train as a groomer and in 1989 gave up nursing and became a full time professional groomer. This was also about the time I first met Helen and it wasn’t long before my numerous cats, dogs and horses became her patients – (although by this time the “dachshund” was of course long gone).

In September I joined the dedicated team at Hall Veterinary Surgery as their very first receptionist.
I have a son and daughter and three grand children – all living in Canberra. Home is shared with Gemma the cattle dog, Bracken the english setter, Tobias the rag doll cat and Revere, an Arabian gelding (he doesn’t live at home – but I think he’d like to).
I love my garden and take every opportunity for horse riding and going for long walks with my dogs.

One thought on “Farewell Erika”