Casper is a sweet, outgoing and confident 9 month old cat who loves to explore and play. Ever since he was a tiny kitten his family always thought he was more like a dog then a cat, his human brother and sister have even taught him to sit and wait for his meals just like a dog. Casper’s family live on a farm and he loves exploring through the paddocks.

Casper’s first non-routine visit with us was in November of 2018, after he refused to eat both breakfast and dinner (which was unusual for typically ravenous Casper) and then vomited too. On physical examination Dr Lesa found that he was painful when she palpated his abdomen, which hinted at the possibility of a foreign object in his tummy.

Casper was admitted to hospital to have an x-ray of his abdomen for further investigation.

As you can see above, Capser’s x-rays revealed a plug shaped foreign body in his abdomen. The safest thing to do for Casper was to perform an urgent exploratory laparotomy (ex-lap) to remove the foreign body. Dr Jenny performed his surgery the same day and removed a small green rubber plug-like object. Casper recovered well and returned home to his family the following day. The only mystery remaining, what on earth was the plug-like object that Capser ingested and where did he find it? His family searched and searched but couldn’t figure out where the object came from, they disposed of the object and life returned to normal.

Fast forward 2 months to the 30th of January. Casper began showing the same symptoms at home as he did back in November, vomiting and some loss of appetite. His owners, who are now well versed in the possible causes of vomiting and armed with the knowledge that he is known to eat things he shouldn’t, brought Casper back in for another check up.

Due to his history, Dr Gillian recommended that we repeat his abdominal x-rays.

You wouldn’t believe it but Casper’s new x-ray was almost an exact replica of the x-rays taken back in November.
Here are the two images side by side: 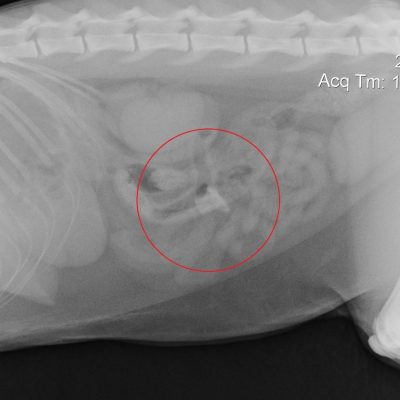 The whole Hall Vet Surgery team was shocked to see that it seemed that Casper had ingested something of the exact same shape, size and material as the first time.

Casper then underwent his second urgent surgery to remove a foreign body from his abdomen. Another successful surgery later and his owners were on a mission to find out where the mysterious objects were coming from.

Caspers whole family were out scouring the paddock from top to bottom to find any trace of the rubber plugs when they came across these..

They were toy bullets from Capser’s human brother’s Nerf Gun. It seems that Casper had been finding the bullets, chewing on the styrofoam section and accidentally ingesting the rubber plug from the end of the bullets.

We are thankful that Casper’s family has found the source of the foreign bodies and we now urge anyone with children and pets to be cautious of Nerf Bullets and the risks they pose to your animals if ingested. It is safe to say that Nerf Guns have been banned in Casper’s household!

If your pet loses their appetite, vomits or becomes lethargic it is always worth coming in for a check up. Casper’s quick acting owners may have just saved his life, twice!