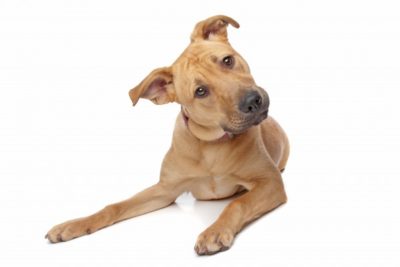 In part 1 of “How Dogs Think” we explored how dogs interpret their surroundings. Now we will look more at how the brain works and what that means for you when you are trying to manage your dog’s behaviour. We will also see how they learn.

Since the evolutionary path of dogs diverged from that of wolves around 40,000 years ago, they have evolved alongside humans and learned to read our body language. Natural selection has favoured domestic dogs with more amiable temperaments that equip them to share enduring bonds with us.

In the last few decades, pet dogs have largely moved from the backyard to the bedroom. They have become integrated into our families and as a result, there is a risk of attributing them with human qualities and emotions that they do not have. This has led to some misinterpretations of the emotion behind their behaviours. Through understanding how dogs see their world and the motivation behind behaviour problems, we can respond appropriately to dogs with undesirable behaviours and guide them to choose more acceptable options. 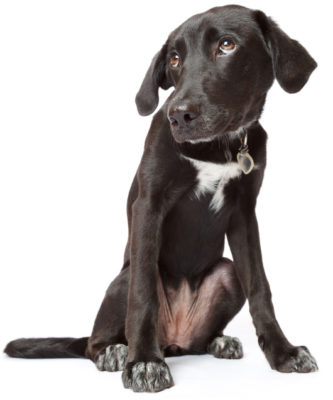 How do dogs perceive their world?

Dogs sense information from the world differently to us. Their sense of smell is exquisite. As their primary sense organ, it is not surprising that it commands a large percentage of their brain. They have been known to pick up the smell of a fingerprint on glass six weeks later!

As far as taste goes, if it smells good, it must taste good too and to our disgust, they find some putrid smells very attractive!

Remember before you raise your voice that your dog’s hearing is four times more sensitive than ours. It’s no wonder that thunder storms can be scary.

Dogs are attuned to movement. They see better at night and have poor colour definition. Blue and purple are seen well, whereas red, green and orange are not.

They are highly sensitive to touch, pressure and temperature. Pain can be more overwhelming for them, not knowing why it is there or when it will stop.

When do dogs learn?

Dogs learn from the consequences of previous actions. They make associations between things that occur together and above all, they always try to get the good stuff and avoid bad things. What’s more, they continue learning throughout life so you CAN teach an old dog new tricks!

Dogs have critical periods for learning and are more vulnerable to developing fear memories if they have a bad experience during these times.

You have most likely heard about the socialisation window for puppies between 3-12 weeks of age. Positive learning about novel and unfamiliar experiences during this time helps to create a well-adjusted dog.

Sexual maturity occurs between 6 and 8 months. Just as with humans, the brain is rapidly developing during this phase.

Social maturity between 12-24 months is another critical learning period when dogs are learning new ways to interact with their world.

Fear periods are critical times when a bad experience has a greater effect on future behaviour. These commonly occur around 10 weeks of age and between sexual maturity and social maturity. A bad experience, for example an intimidating interaction with a strange dog, during a fear period can lead to a persistent fear of unfamiliar dogs.

Geriatric dogs undergo similar changes with brain aging that people experience and this is another critical period when dogs are more vulnerable to developing anxiety disorders.

How do dogs learn?

Classical conditioning (remember Pavlov’s dog?) is learning by association. For example, when food arrives with the sound of a clicker, the clicker becomes associated with a pleasant reward. Before long the clicker by itself triggers a positive emotion and can be used to reward desirable behaviour alone. With this type of learning, the dog is not consciously offering a behaviour, however we can use classical conditioning to change their emotional response.

Operant conditioning is learning from the consequences of an action. What the dog gets or doesn’t get after offering a behaviour influences whether they will use that behaviour again in a similar situation. Positive reinforcement is the recommended form of operant learning and is the basis of rewards based training. Dogs and owners who train with this method LOVE training because it’s fun and strengthens the bond they share.

We can also modify behaviour by removing a reward to reduce the chance of a behaviour being repeated. For example our pup might jump up on us for attention. Completely ignoring jumping up (and that means NO attention – not looking at, speaking to, or touching the dog) can lead to cessation of the behaviour if you are consistent, however the behaviour may initially increase as a heightened effort to gain your attention and care must be taken not to reward the heightened behaviour.

It is less likely to frustrate your dog if instead, you reward an alternative desirable behaviour. Make your training mantra: ‘don’t do that, do this instead.’ For example give attention, but only after the cue to sit is followed by four paws and the bottom are on the ground.

Punishment is another form of operant conditioning, however it is not recommended. For a start it is aversive and damages the pet-owner bond. It is also very difficult to do correctly as the punishment needs to be immediate, consistent and sufficiently aversive (harsh) to stop the behaviour being tried again. Dogs are not deliberately trying to misbehave and never deserve to be punished. They are just doing what works for them to fulfil their canine needs. Besides, there is enough bad stuff in the world without adding negative emotions like fear into our relationship with our mate.

We know ourselves that fear memories are strong. They evoke a strong avoidance (flight) reaction in the future. If avoidance is not an option, an aggressive (fight) response may be the last resort. Dogs in this heightened aroused state cannot learn or engage in training.

Flooding refers to exposing the pet to something it fears at an intensity where it becomes overwhelmed and gives up. This is also known as learned helplessness and should be avoided at all costs. For example forcing a dog that fears other dogs to be close to unfamiliar dogs would be like putting a person with a spider phobia in a room full of spiders! Inducing shut down is not an acceptable way to change behaviour and is most likely to increase the fear emotion.

Dogs also learn by habituation, which is where they just get used to something of no consequence, for example a pup that grows up near a main road may be tolerant of traffic noise.

Using our knowledge of the way dogs learn, we can work with them to change their emotional experience and thus the behaviour they choose. We can desensitise dogs to a fear trigger by patiently exposing them to a low level of that trigger such that they no longer feel threatened. When they are distant enough from the trigger to be calm, we can pair the low level trigger with something positive, like a treat or a game. With time, a lot of patience and attention to body language we can bring about a change the dogs emotional experience from fearful to calm.

In Part 3 of ‘How Dogs Think’ we will explore how anxiety scrambles normal thinking, learning and processing. When our dog is anxious or distressed, we can help them by using positive methods to reduce this negative emotional state. Our goal is to foster calm so that they can learn behaviours that help them to feel safe. This is essential for their well-being.