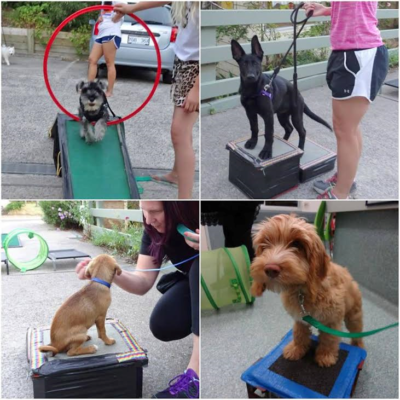 So, you have an adorable new addition to your family. Here are some tips to help you raise a happy-go-lucky canine citizen.

Early and appropriate socialisation is key. This is the time puppies learn to accept the myriad of objects and creatures, including humans in their world. Missing out on positive exposure to novel situations when under 12 weeks can lead to shy or even aggressive dogs. However, if socialising your puppy is performed appropriately, then your pet will become a confident, friendly and well-rounded member of your family. Puppies usually go into their new homes at around six to eight weeks old, so it’s vital to introduce your puppy to as wide a variety of people, situations, and animals as soon as possible. Do not wait until 16 weeks to start socialising your puppy – this is too late.

Ensure socialisation encounters are varied and positive. Avoid overwhelming situations that could result in a fearful association at this sensitive age and be mindful of where you take your puppy and what animals it meets before its vaccinations are completed.

Socialising your puppy with people

Introduce your puppy to as wide a range of people as possible. This should include people of all shapes, sizes, ages and races. Gradually increase the number of interactions as the pup gets older and becomes more confident.

If you learn to read dog body language you will be able to judge how they are coping with novel interactions and situations. Is the tail on a happy plane or are they frightened – with ears back, tail low, cringing or looking away.

Passing your puppy to a stranger, or having a person bend over, hug or stare at your pup can be frightening to the pup. Instead, have people squat down to their level, turn slightly side on and give your puppy small treats to invite interaction rather than force it upon them.

Be proactive and try to anticipate potential bad encounters. Puppies are inquisitive and inexperienced and can get themselves into bother very easily. Keep a close eye on them during their socialisation period to help avoid potentially stressful situations.

Socialising with other dogs

It’s vital that your puppy socialises with other dogs as well as humans. Introduce your puppy to other dogs outdoors and on neutral territory. Ensure that both dogs are kept on their leads so they can easily be removed from any potentially uncomfortable circumstances. Avoid dog parks where an uncontrolled approach can frighten your little one.

Let the dogs see each other from a distance and allow them to approach each other at their own pace and keep a close eye on the body language of both pets. If it looks like either dog is uncomfortable, then simply remove your puppy from the situation and attempt to reintroduce them more slowly later.

If you are introducing your puppy to a new dog in your home then you should also start slowly and talk to our behaviour team about a plan to set up for success.

Puppies, as with humans, learn social behaviour from their elders. Older dogs may not like your puppy putting their teeth and paws all over them unless invited to do so, and will let your puppy know when they have crossed the line by ‘telling them off’. Let them do this, but make sure that it does not go too far. Stop your puppy from trying to go back for more when the older dog has had enough.

Bear in mind that puppies often won’t be fully vaccinated yet, so make sure you only introduce them to healthy vaccinated dogs. Current vaccines provide a high level of protection for your pup from 10 weeks of age, however care should be taken to minimise potential exposure to disease before the vaccine course is completed.

Finally, it is highly recommended to take your puppy to a well-managed socialisation class. They may be settling in just fine with family, however this is a great opportunity for you to learn about puppy behaviour and socialise your little one to their vet’s office as well as playing fun games. Ask us about our puppy preschool classes!