Riley is an energetic Pointer cross who helped out with the baking once too often. A couple of hours after eating a whole batch of apricot rough muffins he started drinking every bowl of water in the house dry. His owner Jenny brought him in to see us when she found he’d vomited the water up all over the lounge. 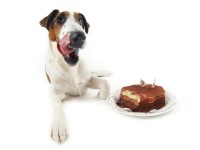 Riley was very flat by the time we saw him. His gums were yellow and he was very dehydrated. The muffins contained what seemed like a list of very healthy ingredients but alarm bells rang when Jenny said that she’d used a sugar free sweetener containing xylitol instead of sugar.

While xylitol is quite safe for humans it is very toxic to dogs. It causes liver failure in dogs and is fatal if not treated intensively.

Xylitol is also found in many chewing gums and in Rescue Remedy pastilles. Wrigley’s list xylitol as an ingredient on the labels of their EXTRA Professional sugarfree chewing gums, Strongmint and Spearmint flavours. One to two sticks of one of these gums can make a small dog very ill. A whole packet might kill a Maltese terrier.

Riley spent a week in intensive care on a drip and with a combination of agents to support his liver. Next baking day he is banished to the back yard until all the muffins are eaten – by Jenny’s children!